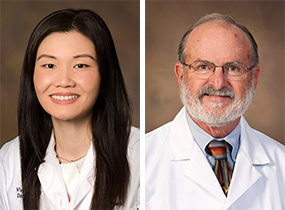 The University of Arizona Division of Dermatology’s Vivian Shi, MD, and Division of Infectious Diseases’ John Galgiani, MD, will offer lectures on eczema and Valley fever at the April 12 lectures for the UA Department of Medicine Research Seminar Series.

The title of Dr. Shi’s presentation is: “The ‘Gaps’ in Eczematous Dermatoses.”

Their talks are scheduled for noon-1 p.m. in Room 5403 of the UA College of Medicine – Tucson and (via webcast) in Conference Room 3030, Banner – University Medical Center South (BUMCS), 2800 E. Ajo Way, Tucson.

Click here (or on the image at left) to view, post and share the flyer for this event. You also can add it to your personal schedule (via iCal, Outlook, Google or Yahoo! Calendar) at this link.

After their presentation, you can click here to view archived video of the lectures and a photo gallery: http://deptmedicine.arizona.edu/research/department-medicine-research-seminar-series (as well as the same for talks from previous seminars).

Launched in fall 2016, the seminars in this series are held on the second Thursday of the month (September through June), noon-1 p.m. in the UA College of Medicine – Tucson, Room 5403, and livestreamed to BUMCS Room 3030. They are designed to team a junior and senior investigator from different divisions in the UA Department of Medicine to showcase the breadth of innovative research being done in the department—the largest in the college with 14 divisions and more than 200 faculty physicians—as well as at the UA.

Each lecturer speaks for 20-25 minutes followed by a brief question-and-answer session. A light lunch is served in the style of grand rounds.

The last lecture in the series was given March 8 by Stefano Guerra, MD, PhD, MPH, a respiratory scientist, professor of medicine and public health, the Henry E. Dahlberg Chair in Asthma Research, population science director, UA Health Sciences Asthma and Airway Disease Research Center and a BIO5 Institute member. His topic, "Biomarkers in Lung Disease: CC16 as a Paradigm."

For more information on the series, including a list of upcoming and past speakers as well as links to video and photo galleries from previous lectures, click here.

At the UA College of Medicine – Tucson, Dr. Shi has served as the principal investigator on multiple clinical studies and recently won a Dermatology Foundation Patient Directed Investigation Grant to study mechanisms involved in regulating anti-oxidative enzymes in patients with eczema. Her current position at the UA also consists of collaborations with the College of Optical Sciences to develop novel multi-modal techniques to detect and evaluate skin inflammation and barrier defects.

In 2015, she won a National Postgraduate Award from the Alpha Omega Alpha Honor Medical Society for a project on “Incorporation of Teledermatology in Nepal for International Medical Outreach.” In 2011, she won an Albert M. Kligman Fellowship travel award from the Society of Investigative Dermatology to present on “The Role of Lymphangiogenesis in IL-4 Transgenic Mouse Model of Atopic Dermatitis” as well as a Research and Education Grant from the Fondation Pour La Dermatite Atopique of France to present on “Evaluating the Use of an Eczema Action Plan in Atopic Dermatitis Patients.”

Dr. Shi has taken part in numerous medical volunteer and community service activities in her post-graduate career, both in the United States and abroad. This includes travel to Kathmandu, Nepal, as part of a collaborative team of dermatologists and physicians to provide care for patients in earthquake stricken villages, to Tuensang, India, to provide care for underserved villages near the Burmese border. She also traveled to Shanghai as part of a medical student volunteer team assisting victims of an earthquake in Szechuan province. And, last summer, she traveled to Chiapas, Mexico, on another medical mission to provide aid for chronic wound patients.

Since then he has increasingly moved from a general interest in medical mycology—the study of fungi—to a focus on coccidioidomycosis (also known as cocci or San Joaquin Valley fever), a fungal disease caused by Coccidioides spores endemic to soils of the U.S. Southwest. His research contributions in the areas of epidemiology, new treatments, pathogenesis, diagnostics, and preventative vaccines have resulted in over 170 peer-reviewed publications.

During the same period, Dr. Galgiani has authored the chapter on coccidioidomycosis for the textbook, Principles and Practice of Infectious Diseases. He has had nearly continuous research support from the Veterans Administration until 2009. Research funding has also come from the NIH, currently for studies of the immuno-genetics of human susceptibility to disseminated coccidioidal infection and the development of a vaccine to prevent Valley fever in dogs and humans.

In 1996, the Arizona Board of Regents approved Dr. Galgiani’s proposal to establish the UA Valley Fever Center for Excellence in order to establish an institutional commitment by the University of Arizona to address this endemic problem so important to the state. The center coordinates education, clinical guidelines and research related to Valley fever, serving as an information clearinghouse across the U.S. Southwest. Since 2003, the center also has served a pivotal role in statewide activities around Valley Fever Awareness Week, which is held by proclamation of the Arizona Governor’s Office in mid-October and includes the Annual Farness Lecture (now in its 23rd year) as part of the UA Department of Grand Rounds.

Dr. Galgiani continues in his role as center director today and is also a member of the UA BIO5 Institute. In addition, he serves as medical director of the Banner – University Valley Fever Program, which is active both in Tucson and Phoenix.