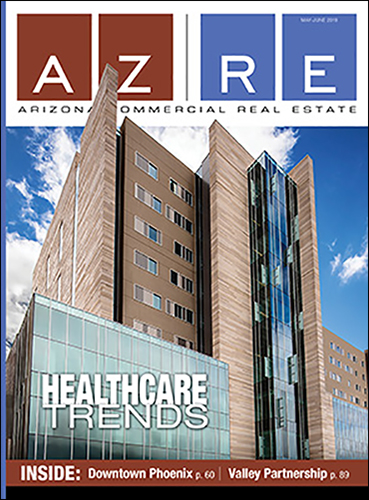 Banner – University Medical Center Tucson’s grand opening of its new nine-story hospital tower in April got prominent play on the cover and in the cover story, “Healthcare Trends,” for the May/June 2019 issue of Arizona Commercial Real Estate Magazine, also known as AZRE.

Published by AZ Big Media, the digital publication for AZRE can be found online at: https://azbigmedia.com/category/real-estate/ 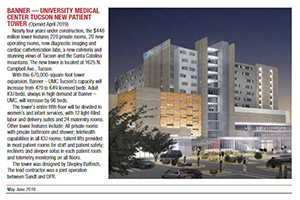 “With this 670,000-square-foot tower expansion, Banner – UMC Tucson’s capacity will increase from 479 to 649 licensed beds. Adult ICU beds, always in high demand at Banner – UMC (as the only Level One Trauma Center in Southern Arizona), will increase by 96 beds.

The tower’s entire fifth floor will be devoted to women’s and infant services, with 12 ligh-filled labor and delivery suites and 24 maternity rooms. Other tower features include: All private rooms with private bathroom and shower; telehealth capabilities in all ICU rooms; patient lifts provided in most patient rooms for staff and patient safety; recliners and sleeper sofas in each patient room; and telemetry monitoring on all floors.

“The tower was designed by Shepley Bullfinch. The lead contractor was a joint operation between Sundt and DPR.”

Also in the May/June 2019 issue was Banner Health’s ongoing $150 million investment into Banner Ocotillo Medical Center (see p. 44), a four-story, 245,000-square-foot, 96-bed hospital on the southeast corner of Alma School Road and Loop 202 Santan Freeway in Phoenix. Okland Construction is the general contractor for the facility, designed by SmithGroup.

See page 46 for expansion and renovation projects at Banner Boswell Medical Center, for which work started in March 2018 with Banner and the Sun Health Foundation teaming to build a $60.4 million emergency room that increases the number of beds from 42 to 56. Banner also will add a new six-story patient tower. Work is expected to be completed by fall 2020.