‘Digging Up a Diagnosis’ May Get Easier with Valley Fever Article, Awareness Campaign 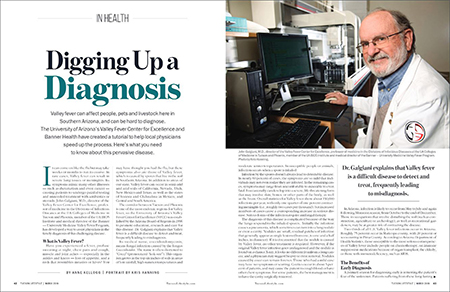 in an “In Health” feature, published in the magazine’s March 2019 issue. But the primarily respiratory disease caused by fungal spores found in arid soils of the Southwest can be hard to diagnose.

Most human cases are found along the Interstate 10 corridor between Tucson and Phoenix and in the San Joaquin and Imperial Valley in Central California, one of the world's most productive agricultural regions.

When inhaled, the spores of Coccidioides, a fungus endemic to the Southwest, can create an infection, coccidioidomycosis or cocci, that exhibits many of the 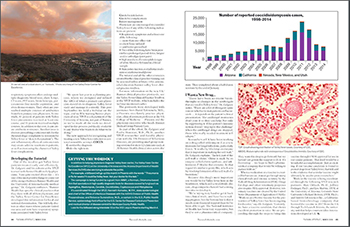 symptoms of flu or pneumonia. And, as a result, many cases are initially treated with antibiotics instead of antifungals. In some people, reactions may be negligible and recovery quick, but in other more vulnerable populations¹ it can spread beyond the lungs and kill. That’s why a quick and correct diagnosis is so important.

Image at right is of accompanying ad in Tucson Lifestyle of Banner – University Medical Center Tucson new nine-story hospital tower set for grand opening in mid-April. The Cyclovia Tucson/Living Streets Alliance will host the site as part of its April 7 community walk/bike/dance festivities. Click the images above and at right to enlarge!

The University of Arizona Valley Fever Center for Excellence and Banner Health have created a new clinical practice protocol that they’ve made publicly available and are engaged in community physician training across the Banner system to speed that process up.

The Tucson Lifestyle article, “Digging Up A Diagnosis,” (click left to view) by executive editor Anne Kellogg offers a tutorial on “what you need to know about this pervasive disease.” In it, John N. Galgiani, MD, UA Infectious Diseases professor, Valley fever center founding director, and medical director of the Banner – University Medicine Valley Fever Program, refers to the protocol as “one of the most positive things to come out of the merger between Banner Health and the UA faculty medical group.”

A sidebar to the article also refers to a Valley fever awareness billboard campaign in Phoenix this month in partnership with the center, Arizona Department of Health Services (ADHS) and Maricopa County Department of Public Health, and funded by a UA Foundation grant from a diagnostic test company, IMMY, from Norman, Okla.

Dr. Galgiani got a chance to see the billboards last week, while he was in Sun City, Ariz., a suburb northwest of Phoenix, last week to train physicians on the protocols at Banner Del E. Webb Medical Center. 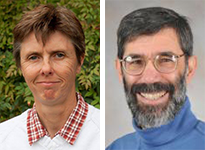 Earlier this week, he was in Rockville, Md., for a two-day conference, “Vaccine Strategies for Endemic Fungal Pathogens,” hosted by the National Institute of Allergy and Infectious Diseases, a unit of the National Institutes of Health. He and Lisa Shubitz, DVM, a Valley fever center associate research professor whose focus is development of a vaccine for dogs, presented on “Vaccines to Prevent Coccidioidomycosis: 60 Years and Counting.” Another UA presenter Neil Ampel, MD, a professor emeritus who worked with the UA Division of Infectious Diseases and Southern Arizona VA Health Care System, spoke on, “Markers of Protective Immunity in Human Coccidioidomycosis.”

Afterward, Dr. Galgiani attended a Valley Fever Roundtable hosted by U.S. Reps. Kevin McCarthy (R.-Bakersfield, Calif.) and David Schweikert (R.-Phoenix), co-chairs of the Congressional Valley Fever Task Force, in Washington, D.C. The event offered an opportunity for leading researchers, patient advocates, doctors, and scientists to update members of Congress on work to improve diagnosis and treatment as well as to develop a vaccine for Valley fever.

“The one for humans is the one for dogs after we prove it successful in dogs,” Dr. Galgiani said. “The idea is we’re doing dogs first as proof of concept that it will work. It shows that it’s effective for a different species other than mice. And when that works, we’ll ask why not use it for humans.”

In the meantime, the Valley fever center has been involved in testing of various detection and treatment options for Valley fever in humans and animals, including use of fluconazole to manage symptoms.

“We set it up specifically for people to be recruited who report to the ERs at these hospitals with symptoms for the disease,” Dr. Galgiani said.

One thing the Tucson Lifestyle article may be obsolete on is where the most number of Valley fever cases occur. Typically, the Tucson-Phoenix corridor is credited with two-thirds of such cases. Recent reports of the ADHS, California Department of Public Health and U.S. Centers for Disease Control and Prevention (CDC), though, reveal a repeat of what was thought to be a fluke last year of more reported cases in the Golden State may have staying power, however inglorious the honor.

The above numbers from the states differ from the final CDC annual report, which reviews reported numbers for duplication, etc., thus reducing final figures. Those numbers are listed below:

² Provisional numbers that have to be checked for duplicate reports, etc., before finalized for report by the National Notifiable Diseases Surveillance System (NNDSS).

Ken Komatzu, MPH, the Arizona state epidemiologist, noted he already lowered the provisional cases of Valley fever in Arizona to 7,555 and final numbers for 2018 from the CDC won’t be out until May. Still, overall final numbers nationwide were up from 8,232 reported cases in 2014 to 14,364 last year. That figure is down from a 2009-12 spike peaking in 2011 with 22,641 Valley fever reported cases that year.

“The state numbers were news because it was the first year that California was ahead of Arizona,” Dr. Galgiani said. “It was an anomaly. Maybe it will keep going... because they’re getting better at reporting. So are we.”