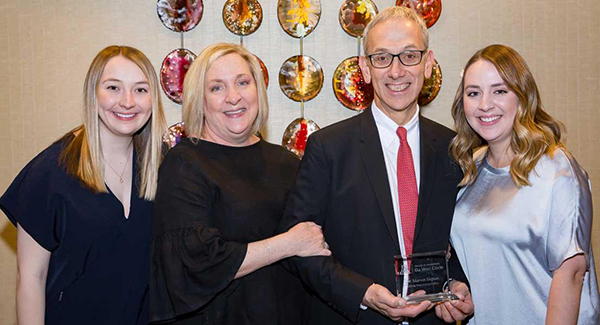 University of Arizona cardiologist, inventor and biomedical engineer Marvin Slepian, MD, has been rolling in kudos of late, with his most recent recognitions coming from the UA College of Engineering where he was named a da Vinci Fellow and his alma mater for his medical degree, the University of Cincinnati, which presented him May 20 with one of four Drake Medals.

On top of all that, he’s also a law student at the UA James E. Rogers College of Law. 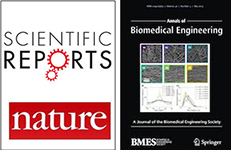 His paper on hemodynamics of transcatheter aortic valve replacement (TAVR), “Comparative fluid-structure interaction analysis of polymeric transcatheter and surgical aortic valve,” that appeared in the Annals of Biomedical Engineering in September 2018 was selected as one of 12 Editors’ Choice papers for 2018, he was informed in January.

Another paper he co-authored, “Device Thrombogenicity Emulation: An In Silico Predictor of In Vitro and In Vivo Ventricular Assist Device Thrombogenicity,” in Scientific Reports in February 2019, has been widely cited as offering a significant breakthrough in predicting blood-clotting potential in mechanical heart devices.

Also in February, he was one of seven UA Health Sciences investigators chosen to present at the Shark Tank competition at the inaugural Research Day hosted by the UA College of Medicine – Tucson at the new Health Sciences Innovation Building — its first public event.

And, in March, he co-chaired an international forum on “Virtual Reality and Healthcare” at the University of Arizona Student Union Memorial Center.

In addition, he was named a Regents’ Professor by the Arizona Board of Regents in mid-April.

His groundbreaking work in medicine, engineering and business has resulted in many breakthroughs that have made a dramatic impact in saving and improving people’s lives. For example, his translational work has resulted in novel therapeutic solutions, including stent coatings, polymer paving, synthetic tissue and cardiovascular prosthetic devices, including the total artificial heart, to name a few. 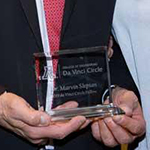 The da Vinci award was presented to Dr. Slepian in recognition of his many achievements at a dinner hosted by the UA College of Engineering at the Westin La Paloma Resort and Spa on April 28. Along with the award comes a $10,000 prize, with which Dr. Slepian plans to support student research in his lab and find ways to present their data to the world. 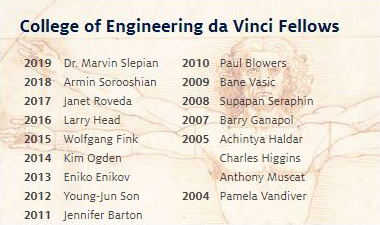 Since 2004, 17 da Vinci fellows have been named. The award is funded by the college’s da Vinci Circle, which has a goal of “fostering a renaissance in engineering.”

He got his experimental start in the home laboratory of his father, also a physician, in New York. From there, there was no stopping him.

“I always felt that I would somehow combine clinical medicine with engineering to make a difference, to be able to affect a larger group,” Dr. Slepian said in a College of Engineering article on becoming a da Vinci fellow.

At the Westin La Paloma, six undergraduate students also were named da Vinci Scholars and the college inducted a third class into its Hall of Fame. About 220 faculty, staff, students, alumni and supporters attended. 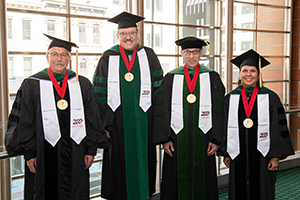 In Ohio, the Drake Medals were first awarded in 1985 to celebrate the bicentennial of the birth of the University of Cincinnati College of Medicine’s founder, Daniel Drake, MD. Dr. Slepian is a 1981 graduate.

In the announcement of this year’s medals, it notes Dr. Slepian is named as an inventor on 52 issued patents and 46 patent applications and co-founded SynCardia Systems, manufacturer of the only total artificial heart approved by the U.S. Food and Drug Administration, Health Canada and the European Economic Area—as well as several other medical device companies. 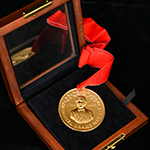 Other honors he has received for his academic and translational research activities include the American Heart Association award for the most significant advance in cardiovascular medicine, the AZBio Pioneer Award for Lifetime Achievement in Biomedical Science Innovation, his role as immediate past-president of the International Society for Mechanical Circulatory Support, and his pick as president-elect of the American Society for Artificial Internal Organs (ASAIO).

NOTE: Thank you to Emily Dieckman, editor with Marketing & Communications team at UA College of Engineering.