Forest Melton, MHA, a regulatory specialist with the Genitourinary (GU) Team and research member with the Therapeutic Development Program at the University of Arizona Cancer Center, 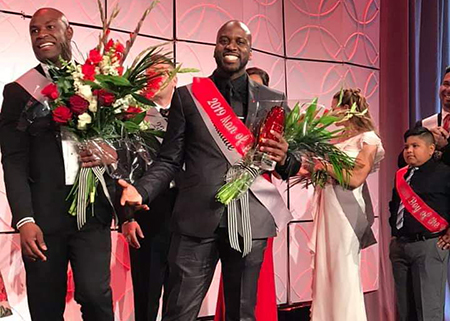 won “Man of the Year” honors from the Leukemia & Lymphoma Society’s Arizona Chapter.

He raised $72,185 for blood cancer research. A record 21 candidates participated in the 10-week campaign for the LLS Arizona Chapter, which raised $1.1 million to support research. The announcement came June 1 at the organization’s Grand Finale Gala at JW Marriott Camelback Inn.

The honor comes two years after Daniel Persky, MD, associate professor in the UA Division of Hematology and Oncology, associate director of UACC Clinical Investigations and director of the UACC Clinical Trials Office, won the LLS Arizona Chapter Man of the Year mantle.

Melton was born and raised in Phoenix to a social worker and a pastor. His was a busy household with eight kids and never a dull moment. Upon graduating high school, Melton moved to Tucson to attend the UA, where he wrestled, cheered and volunteered.

After college, he became a caregiver for a 16-year-old quadriplegic named Drew, who taught him much more about service, community, and friendship than anything up to this point in his life. He sits on the board of the Ben’s Bells Project and is the fundraising chair for SOUNDS Academy.

We’re told to keep a lookout for an upcoming edition of USA Today that will feature Melton’s accomplishment! Meanwhile, you can hear him on “Love & Heartbreak” in this 2017 audio recording from USA Today’s Storytellers Project.