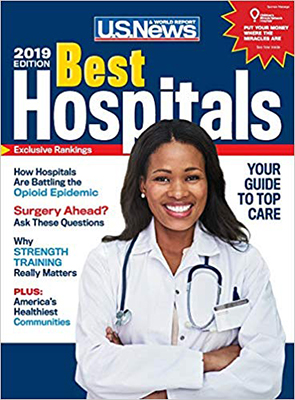 U.S. News & World Report released its 2019-20 Best Hospitals national rankings and ratings today and the numbers could be better for Banner – University Medical Center Tucson (click to go to the magazine's webpage for the hospital).

Not only did the hospital not make the top 50 rankings for any adult subspecialties, procedures or conditions for the first time since 2000, it failed to make the top hospitals in the state list (for which it was 3rd last year and tied for 2nd with Banner – UMC Phoenix in 2017). Nor did it make the Best Hospitals list for Southeastern Arizona or Tucson, both of which it has led for the past several years.

On the bright side, Banner – UMC Tucson was rated as “High-Performing” in four adult specialties (Cancer, Geriatrics, Nephrology, and Pulmonology & Lung Surgery) and two adult procedures/conditions (Colon Cancer Surgery and Heart Failure)—all of which are in the UA Department of Medicine. Nurse staffing also was rated as very high, where more nursing care per patient is associated with better patient outcomes and patient experience. 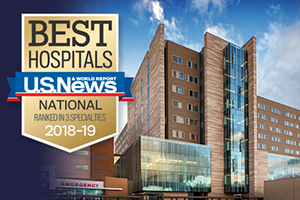 There will be no new banner on the hospital to celebrate this year's rankings, despite a number of recognitions for patient care and improved numbers coming from clinical departments.

Banner – University Medicine, the academic division for Banner Health, pointed to another new algorithm the magazine used to calculate the rankings (a tool that's changed at least twice in recent years, 2019 and 2017—when the list was released late due to a need to recalculate results following complaints). Bear in mind that some 5,000 medical centers are evaluated on metrics such as death rates, patient safety and hospital reputation as reported by some 30,000 physicians. It’s a herculean task that hasn’t been free of criticism underpinned in part by rationales and counterpoints for the Affordable Care Act with patients and payors demanding improved cost transparency and better patient experiences. 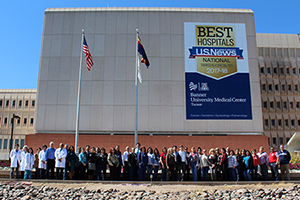 On that last point, Banner – UMC Tucson did not fare well with regards to patient feedback, mustering only two stars out of five in most U.S. News experience categories this year. This could have been affected by glitches as Banner rolled out a new electronic health record platform in Tucson in October 2017 and, in the middle of that, consolidated many of its adult ambulatory clinics in December 2017 and January 2018 at a new $100-million, 208,000-square-foot adult multispecialty outpatient center known as Banner – University Medicine North, Building 2, adjacent to the UA Cancer Center's Peter & Paula Fasseas Cancer Clinic at 3838 N. Campbell Ave. That's not to mention preparations for and shifting of multiple departments for the opening this April of its new state-of-the-art, $446-million hospital tower at Banner –UMC Tucson that moved the hospital's entrance to 1625 N. Campbell Ave.

Still, it's the market momentum from opening Banner – University Medicine North, other new clinics as well as the new hospital tower that Banner is counting on as the game-changer that will burnish its reputation as the health care leader in Southern Arizona. Add to that Banner's acquisition of an extensive line of urgent care centers and partnerships like that with Safeway and pharmacies like Walgreens and CVS (which now owns Aetna), and that vertical market integration pathway is well within its grasp. This was underscored along with positive numbers pointing in the right direction by Banner – University Medicine CEO Chad Whelan, MD, speaking at recent DOM and COM general faculty meetings.

A History of Excellence

Below are national top 50 rankings for the hospital — links for years listed go to PDFs of methodologies used for each Best Hospitals annual issue:

To help patients decide where to receive care, U.S. News generates hospital rankings by evaluating data on nearly 5,000 hospitals in 16 adult medical specialties, nine adult medical procedures or conditions and 10 pediatric specialties. To be nationally ranked in a specialty, a hospital must excel in caring for the sickest, most medically complex patients. The ratings in procedures and conditions, by contrast, focus on typical Medicare patients. Hospitals that do well in multiple areas of adult care may be ranked in their state and metropolitan area. Read more about how hospitals are ranked.

U.S. News evaluates hospitals in certain procedures and conditions and assigns each hospital a rating of high performing, average or below average in each procedure or condition. Eligibility to be rated is based on the number of patients treated during the evaluation period.