Home » About » Ways to Give

The Bressler-Alpert Society and Bressler-Alpert Travel Assistance Fund were created in August 2012 through the generosity of current and former faculty, and alumni of the University of Arizona Department of Medicine.

The award and the society of UA faculty and alumni that fund it are named for Rubin Bressler, MD, and Joseph S. Alpert, MD, who served previously as department chairs for 30 years spread over four decades—Dr. Bressler, 1976-92, and Dr. Alpert, 1992-2006.

Thank you for your support! 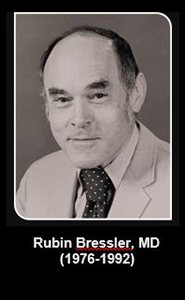 A founding faculty member of what was soon to be University Hospital, Dr. Bressler joined the UA faculty in 1970 and chaired the Department of Pharmacology before leading the Department of Medicine and its Division of Clinical Pharmacology. He had particular expertise in the treatment of diabetes and hypertension and continued to teach after his retirement in 2000 as well as pursue research, studying heart failure and organizing a proof-of-principle trial at the UA to test his hypothesis of a potential treatment for diastolic dysfunction and heart failure. For his “meritorious efforts to advance science or its applications” both in his own research and in support of others, he was elected a fellow of the American Association for the Advancement of Science (AAAS) in 1990. Dr. Bressler passed away in 2009. 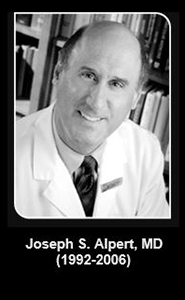 A cardiologist, Dr. Alpert still practices as a member of the UA Sarver Heart Center. He has received numerous awards, including a 2004 Gifted Teacher Award from the American College of Cardiology, and is a past chairman of the Council on Clinical Cardiology of the American Heart Association, which honored him with its Distinguished Achievement Award in 2001. He has well over 600 publications to his credit, including books, monographs, articles, reviews, editorials and abstracts—and has served on the editorial boards of numerous journals, mostly related to cardiology and cardiovascular disease. Among these, he is editor-in-chief of the American Journal of Medicine, the official journal of the Alliance for Academic Internal Medicine, for which he writes a monthly blog and hosts videos on key health topics.

The award was established to support the educational mission of the department by funding travel for residents and fellows who are engaging in high quality research and presenting their findings at academic meetings. To date, there have been over 30 such travel awards distributed for travel to medical conferences, seminars and workshops across the United States and Canada, as well as to Paris and Munich, Germany.