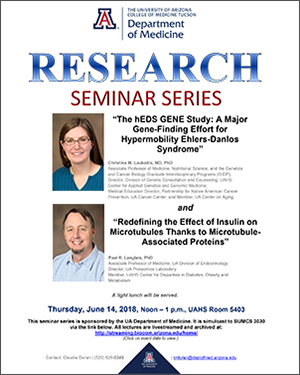 Two researchers with cross-disciplinary roots—Christina Laukaitis, MD, PhD, and Paul Langlais, PhD—return to the lineup for an in-depth discussion on the genetics and proteomics of precision medicine solutions under development at the University of Arizona Health Sciences for the next UA Department of Medicine Research Seminar on Thursday, June 14.

Dr. Laukaitis, who is with the the UA Division of Geriatrics, General Internal and Palliative Medicine and the Center for Applied Genetics and Genomic Medicine, will talk on “The hEDS GENE Study: A Major Gene-Finding Effort for Hypermobility Ehlers-Danlos Syndrome.”

The topic for Dr. Langlais, of the UA Division of Endocrinology, Diabetes and Metabolism and the Quantitative Proteomics Laboratory, is “Redefining the Effect of Insulin on Microtubules Thanks to Microtubule-Associated Proteins.”

Their lectures will be noon-1 p.m., in Room 5403 of the UA College of Medicine – Tucson. It also will be simulcast live to Conference Room 3030 at Banner – University Medical Center South. A light lunch will be served in the style of grand rounds.

You can add the event to your personal schedule (via iCal, MSOutlook, Google or Yahoo! Calendar) at this link.

Drs. Laukaitis and Langlais were originally scheduled to speak May 10, but that seminar was led by Paul Noble, MD, a special guest lecturer from Cedars-Sinai Medical Center in Los Angeles who spoke on "The Changing Landscape of Fibrosing Lung Diseases," including idiopathic pulmonary fibrosis. To see archived video or photo galleries from his and previous lectures in the series, see this link.

The originally scheduled speakers for the June 14 seminar, the UA's Nima Toosizadeh, PhD, and Yves Lussier, MD, have had their talks resecheduled for the beginning of the next academic year's Medicine Grand Rounds starting in August. Look for details coming at a later date.

Dr. Laukaitis’ research has focused on genetic and environmental risk factors that predispose individuals to cancer in order to treat neoplasia before cancer develops with an emphasis on people at high risk for breast and other cancers due to mutations in BRCA1, BRCA2, APC and mismatch repair genes. In her lab, they seek explanations for high-risk families without identified mutations. She has experience working with WBF and UDCA sample genotyping and interpreting genetic data that influences cancer risk. In addition to this research, she won an $800,000 grant in late 2016 from the Wallace Research Foundation to study the genetic basis of the joint hypermobility type of Ehlers-Danlos Syndrome, a group of inherited disorders that mostly affect the skin, joints and blood vessels. With research partners from the Division of Rheumatology, she has since received two additional smaller grants related to that research.

Among her honors and recognitions, Dr. Laukaitis was a member of the COM-T Learning to Lead Faculty Leadership Program (2014-15), named Researcher of the Year by the Arizona Chapter of the American College of Physicians (2013), among the Arizona Daily Star's “40 under 40” up-and-coming professionals (2011), winner of the Yellen Distinguished Young Investigator Award at the UA Cancer Center (2011), and chosen to participate in the Alliance for Academic Internal Medicine’s T. Franklin Williams Scholars Program in Washington, DC (2011). In addition, she was a visiting researcher at Oxford University and winner of the American Medical Women’s Association’s Janet M. Glasgow Award (Summer 2003).

She has served on multiple committees related to genetic, genomic, molecular and precision medicine research at the UA College of Medicine, UA Health Sciences and the broader UA campus. She, currently, is a member of the college’s Multidisciplinary Endocrine Tumor Board and MD/PhD Program Admissions Committee, organizer of the college’s Genetics & Genomics Grand Rounds, and an ad hoc member of the UA Cancer Center’s Scientific Review Committee. And she has contributed to several scholarly book chapters and monographs and authored or co-authored more than 30 refereed journal articles and 28 abstracts.

Dr. Langlais is an associate professor of medicine in the Division of Endocrinology, director of the Proteomics Lab and a member of the Center for Disparities in Diabetes, Obesity and Metabolism at the UA Health Sciences. He joined the faculty at the UA College of Medicine – Tucson in 2016, having served previously as an assistant professor and proteomics lab director at Mayo Scottsdale and, before that, as an assistant research professor and director, Center for Metabolic and Vascular Biology Proteomics Lab, Arizona State University—where he also completed a post-doctoral research fellowship. He holds a bachelor’s degree in biology and chemistry from Texas Tech University and a doctorate in biochemistry from the University of Texas Health Science Center at San Antonio.

For more than 20 years, Dr. Langlais has performed discovery-based research in the field of insulin signal transduction. He is very proficient at mass spectrometry-based, label-free quantitative proteomics, i.e., adaptation of mass spectrometry to the quantification of protein post-translational modification levels and/or protein expression levels among groups and/or treatments. He is able to explore protein-protein associations via interactome characterization. He has extensive experience in researching the role proteins play in the insulin signal transduction cascade, and how these proteins are regulated by either post-translational modification or by protein-protein interactions. Beyond that, he also specializes in contributing quantitative proteomics experiments to collaborators in need of this technique.

About the DOM Research Seminar Series

The brainchild of DOM Chair Monica Kraft, MD, and Vice Chair for Research Jil Tardiff, MD, PhD, the UA Department of Medicine Research Seminar Series began in September 2016 as a way to showcase the remarkable breadth of medical research conducted at the University of Arizona.

In the past, it has paired a junior and senior investigator from different divisions who each speak for 20-25 minutes followed by Q&A sessions. Going forward, the seminars will include a single speaker from one of the department’s 14 divisions and will be held in conjunction with the Medicine Grand Rounds on a Wednesday, between August and June, noon-1 p.m., in UAHS Room 5403. A light lunch will be served per usual.