UA/Banner ‘Top Doctors’ Listings in Tucson Lifestyle Down in 2018 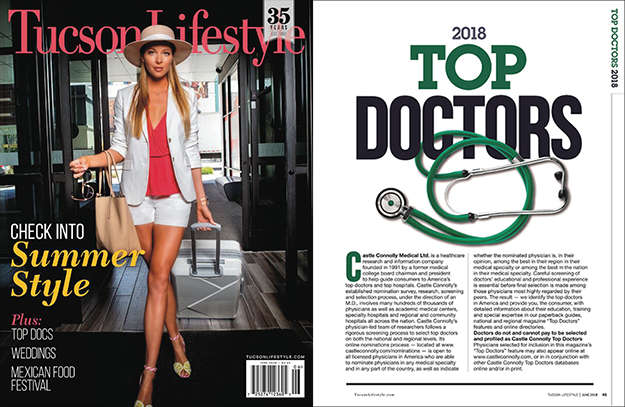 If you missed Tucson Lifestyle’s annual “Top Doctors” listings this year, that’s because it got moved from its traditional spot in the July issue to June—where it was a bit crowded by the magazine’s Summer Style and Weddings themes.

This year’s listings also did not include any local “featurettes” (short profiles) on any physicians listed.

We offer our congratulations to the 85 University of Arizona/Banner – University Medicine physicians from Tucson — 24* of whom were from the UA Department of Medicine — recognized as “2018 Top Doctors.” That overall number is down a bit from previous years that average about 100 UA/Banner doctors.

The number of DOM doctors on the list has remained fairly consistent year to year. Those included this year (with their specialty) are:

The “Top Doctors” list in Tucson Lifestyle is compiled by Castle Connolly Medical Ltd., which notes in this year’s introduction that, “Doctors do not and cannot pay to be selected and profiled as Castle Connolly Top Doctors.” It goes on to note that its physician-led team of researchers follows a rigorous selection methodology to select top doctors at a regional and national level. The online nomination process — go to www.castleconnolly.com/nominations — is open to all U.S. licensed physicians able to make nominations in any specialty and in any part of the country.

For those interested in previous year’s Top/Best Doctors listed in Tucson Lifestyle, see the following:

Prior to 2016, Tucson Lifestyle used a different vendor for its list, Best Doctors in America® — which is now a biennial list that comes out at the beginning of the year.

* (Anca Georgescu, MD, and Cristine Berry, MD, MHS, were listed as UA/Banner doctors in this issue, but had left for positions elsewhere. Dr. Georgescu left at the end of June 2018. Dr. Berry left a year earlier.)