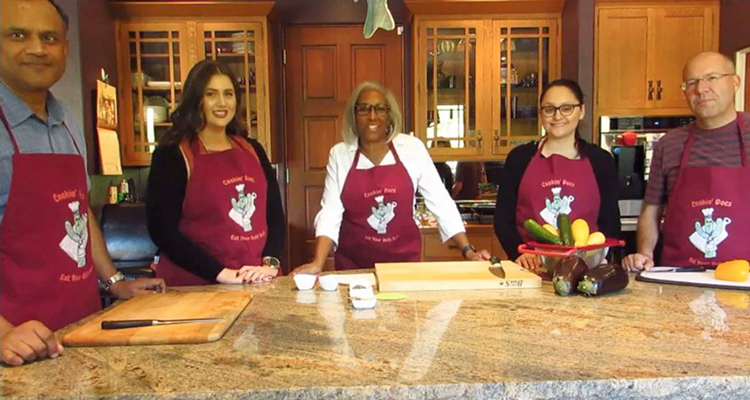 The health expo at the University of Arizona Centennial Hall debate April 23 between Andrew Weil, MD, and Irving Kron, MD, served as the debut site to unveil a “Cookin’ Docs” video that launched a new program by the UA Division of Gastroenterology and Hepatology.

The video series—with the subtheme “Eat your guts out!”—will offer dietary advice during the course of a cooking class to address issues confronted by sufferers of various gastrointestinal (GI) and other medical disorders on how to improve their diets to lessen the impact of those disorders on their lifestyles.

Click here or on image at left to view the brochure. See the video at the bottom of this page.

Social media posts on Twitter and Facebook announced the program just before the “Great Debate” between Drs. Weil, founder of the UA Andrew Weil Center for Integrative Medicine, and Kron, interim dean of the UA College of Medicine – Tucson, which focused on weighing the value and benefits of “Prevention vs. Intervention” as two approaches in health care.

Among the four panelists who joined Drs. Weil, Kron and UA President Robert C. Robbins, MD, who moderated the event, was Juanita Merchant, MD, PhD, GI chief and an elected member of the National Academy of Medicine. Drs. Merchant and Weil commented at the event on how many aspects of the North American diet, are detrimental to health and wellness because it’s too high in calories, saturated fat, sodium and added sugars, without enough fruits, vegetables, whole grains, calcium and fiber. Better awareness of ways to improve that diet, as well as exercise to reduce obesity, would improve the overall outlook for Americans in general, all agreed. 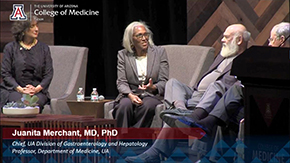 Dr. Merchant noted her crew ran out of the limited number of flyers for the Cookin' Docs program they had at their Great Debate health expo table, where they showcased the inaugural video. She plans to start the program with a quarterly rollout of new videos that bring in different area chefs, physicians and health and diet experts, as well as patients themselves, to demonstrate different recipes that suit their condition, how to prepare them—and how to make them tasty. Eventually, she'd like it to become a monthly affair.

"There's a big interest in learning how to eat healthier and, particularly for folks with a health condition, that can be important," Dr. Merchant said. “We could say, ‘Well, you can order Blue Apron,’ but most people can’t afford to do that every single day of every week. Right? You’re going to cook something at home. The other problem is that, every time we eat out, we’re usually getting off of our diet. And sometimes that can be a diet we need to be on. So, you need to know how to purchase and prepare the foods that are going to keep you healthy.” 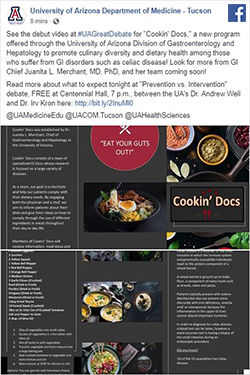 Celiac disease is a disorder of the small intestine in which the immune system in genetically susceptible people reacts to the protein component of a wheat kernel, which is ground to make bread, tortillas, cakes and pasta, etc. As noted in the attached flyer on the program, patients typically suffer from diarrhea and iron deficiency, anemia and/or osteoporosis because resulting inflammation in the upper GI tract inhibits the ability to absorb key nutrients. Gluten-free diets assist in preventing this inflammation in the one percent of the U.S. population that suffers from celiac disease.

In the video, Dr. Merchant appears with UA Gastroenterology Fellowship Program Director Bhaskar Banerjee, MD; Veronica Nguyen, MD, a GI fellow (see video image below); Todd Boltz, administrator, UA Department of Medicine; Sepulveda, and Karen Rico, a medical student in Dr. Merchant’s lab. They assist her in preparing the vegetarian dish, ratatouille (pronounced rat-ah-two-ee) made famous by the 2007 Disney animated movie of the same name. The recipe is included in the brochure above.

Folks can learn more about Cookin’ Docs at its Facebook webpage: www.facebook.com/cookindocs

“We want to try and have more videos addressing different digestive disorders and how to minimize symptoms,” Sepulveda said. “We’ll have doctors in our division work with a chef to collaborate on different recipes and ingredients that address dietary needs of different patients based on their particular disorder.”

An upcoming video, for instance, likely will include Sasha Taleban, MD, director of the UA Inflammatory Bowel Disease Program, and could address issues faced by Crohn's disease or colitis patients.

As related dietary issues affect more than just the digestive system, Cookin’ Docs are looking to work with other divisions and units in the UA Health Sciences to make the video series more interdisciplinary. That includes, but isn’t limited to, the:

It also includes working with related authorities with the Department of Nutritional Sciences at the UA College of Agriculture and Life Sciences and the UA Mel and Enid Zuckerman College of Public Health.

The inaugural video was filmed by Cheryl Sanborn, a Los Angeles-based photographer who is a friend of Dr. Merchant.

Questions? Contact Dr. Merchant through Katherine Sepulveda at ksepulveda@email.arizona.edu or (520) 626-3334.

For more on eating healthy and “Why Good Nutrition is Important” to your health, see this article from the Center for Science in the Public Interest.