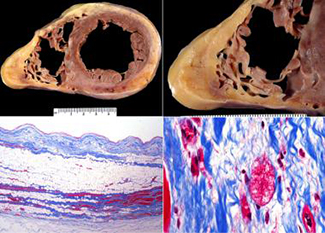 This sudden, unexpected loss of heart function often is fatal. Sudden cardiac arrest is not a heart attack (myocardial infarction), but can occur during one. It is the largest cause of natural death in the United States, causing about 325,000 adult deaths each year—and is considered responsible for half of all heart disease deaths. It’s estimated more than 7 million lives are lost each year to sudden cardiac deaths worldwide.

While these phenotypes may appear unrelated when compared by traditional clinicopathological criteria, recent evidence indicates that they may share common genetic causes and follow similar “final common pathways.” Mutations in genes encoding desmosomal proteins or desmosome-interacting proteins appear to play a major role in causing ARVC and ALVC. Recent evidence suggests some common genetic causes in ALVC and aDCM (and, therefore, ARVC) as well as mechanistic links between mutations in genes encoding Z-disk proteins and desmosomal disruption in aDCM. Despite progress in understanding the origin and progression of classical ARVC, many questions remain unresolved. The inability to identify causal genes in AVC patients represents a clear obstacle to individual patient risk-stratification. It also seriously limits the potential to identify preventive measures for at-risk or “silently” affected family members.

The goal of this Multicenter NIH funded research project is to enroll patients to our registry. Study the ongoing disease and its characteristics.