Drs. Norm Beatty (left) and Steve Klotz present on kissing bug research at the University of Arizona for the American Society of Tropical Medicine and Hygiene annual conference in New Orleans.

Norm Beatty, MD, a fellow with the University of Arizona Infectious Diseases Fellowship Program and the most recent recipient of a Bressler-Alpert Society Travel Award, gave presentations at two events this fall in coordination with his research mentor from the Division of Infectious Diseases, Stephen A. Klotz, MD, that focus on kissing bugs and Chagas disease.

“Chagas research completed by our team this year has been presented by me and Dr. Klotz at both the IDSA and ASTMH meetings, including an oral presentation at ASTMH,” Dr. Beatty said. “We have also just published the first well-documented case of likely locally acquired Chagas Disease in the state of Arizona.”

That paper, “Evidence of Likely Autochthonous Transmission of Chagas Disease in Arizona,” appears in the December issue of the American Journal of Tropical Medicine and Hygiene.

Dr. Beatty received a $500 award to assist in his travel to the American Society of Tropical Medicine and Hygiene’s ASTMH Annual Conference held Oct. 28-Nov. 1, 2018, in New Orleans, where he presented two research posters: 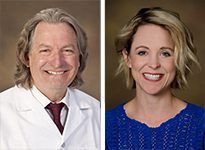 Dr. Klotz, a professor of medicine, immediate past division chief, and medical director of the Arizona AIDS Education and Training Center and the UA Petersen HIV Clinics, also gave an oral presentation of the research at ASTMH.

In addition, Dr. Beatty presented a poster, "Southern Arizona Town: Homes Colonized by Kissing Bugs. Is Chagas Disease Being Transmitted?," at the Infectious Diseases Society of America’s IDWeek 2018 conference, held Oct. 3-7, in San Francisco. In addition, he received an IDWeek Trainee Award, which are presented to trainees who submitted excellent research.

EXTRA INFO: A good tax-free donation for the holidays

For alumni, staff, faculty, former faculty and friends of the University of Arizona Department of Medicine, the Bressler-Alpert Society Travel Assistance Fund serves as an excellent opportunity at the end of the year to support the mission of the department and UA College of Medicine – Tucson by helping to send our trainees to present on their research at academic conferences across the country and globe.

Click here for a full list of Bressler-Alpert Society travel awardees—all 44 of them including Dr. Norm Beatty (right), with their photos, their research and where it was presented.

For more information on the Bressler-Alpert Society, visit this link.

For fellows and residents in training programs or research in internal medicine at the UA College of Medicine – Tucson, you can apply for travel awards here: BAS Travel Assistance Request Form [PDF].

For other giving opportunities and needs of the department see: WAYS TO GIVE.

Additional studies may be warranted to determine how many people are affected by Chagas Disease—which is caused by infection from a parasite Trypanosoma cruzi transmitted largely by the bite of Triatomine insects, i.e., kissing bugs—not just in Arizona, but across the United States.

The U.S. Centers for Disease Control and Prevention notes the insects are found only in the Americas, but refers to the disease as one from Latin America despite the fact kissing bugs exist across a large swathe of the United States, mostly in sun belt states. Of the 7-8 million estimated Chagas disease sufferers, the CDC reports about 300,000 live in the United States and likely acquired it in Latin American countries.

Still, Dr. Beatty said the only Chagas prevalence study done from a population standpoint was in Los Angeles County. Published in 2017, the L.A. study focused only on 5,000 Latin American-born residents with 1.24 percent testing positive for Chagas Disease.

“People here in Southern Arizona are being exposed to and bitten by these kissing bugs at a higher rate than expected and our projects have led to more public awareness of kissing bugs and their potential to cause allergic reactions and possibly the transmission of Chagas Disease,” said Dr. Beatty.

A big part of the problem with Trypanosoma cruzi infections, he said, is that people may not be aware of the health implications. Chronic infection involves the heart (cardiomyopathy, heart failure, arrhythmia, cardiac arrest) or gastrointestinal tract (enlarged esophagus or colon) and eventually can be fatal. It also can be passed on by mothers to unborn infants.

“The disease typically takes decades to manifest, but the effects are permanent. Now, however, we have an antiparisitic medicine called benznidazole that can be used for treatment," Dr. Beatty added. “Recently approved in the United States by the FDA, it has been shown to decrease the effects of chronic Chagas Disease, which include primarily heart failure and cardiac arrhythmias.”

The best way to avoid Chagas Disease is awareness, prevention and treatment.

Dr. Beatty, in the second year of his fellowship and a graduate of the UA Internal Medicine Residency Program – South Campus, heads next to the University of Florida College of Medicine, where he will be a clinical assistant professor with the Division of Infectious Diseases and Global Medicine. That position starts in July 2019.

Looking back, he added, "Our kissing bug research team put a lot of effort in this summer to complete these projects. It was an honor for me to work alongside them. I am also grateful for the Division of Infectious Diseases for supporting my efforts."

For more information on Chagas Disease, see this CDC fact sheet for providers, infographic or visit the website.